Briefing Presidential Advisors Can Add Hope to the Climate Debate 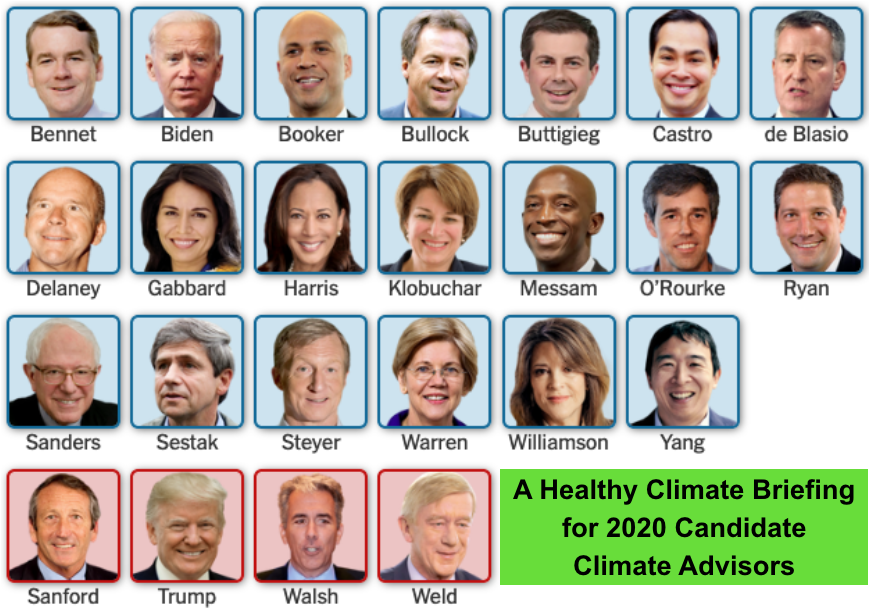 What can happen when over a dozen presidential candidates’ climate advisors hear about solutions to reverse global warming and restore a healthy climate ? After a unique San Francisco briefing, their candidates can start telling inspiring climate stories on the campaign trail! And we can get better debate questions. (You can also read and comment on this story at Medium: free access link.)

ClimateChangesEverything.org, an independent website promoting climate restoration projects, is assembling a team to educate and empower presidential candidates to talk about inspiring climate goals and action. Can you devote 5-20 hours/week starting in September to help catalyze national conversations about hopeful climate strategies? Can you recruit climate-focused colleagues to join too?

Our unprecedented strategy: Invite all candidates’ climate policy advisors to a nonpartisan Bay Area Healthy Climate Briefing. We will hold it ASAP after Climate Week in late September. Advisors will bring back to their candidates stories of existing technologies, solutions, and initiatives to reverse global warming and restore a safe and healthy climate, most of them developed here in the Bay Area.

Calling for volunteers to form a team for: Networking to climate communities and candidate supporters; 2. Event organizing for briefing and fundraisers; 3. Communicating our plans. Please copy & forward this Call for Volunteers!

Details at Medium: Briefing Presidential Advisors Can Add Hope to the Climate Debate or contact us.

Grassroots groups, joined by 20 presidential candidates, pushed back when the Democratic National Committee nixed holding a debate on our climate crisis. As support grew from activists, state DNC chairs, the DNC resisted and ultimately refused. In parallel, media have stepped forward, first  with a CNN-hosted climate  town hall on Sept. 4 in New York. Ten candidates appeared for 40 minutes eacch. That was an extraordinary event in terms of the candidates’ attention to climate, the extraordinary level of audience questions, and the media attention. An MSNBC two-day forum in Washington DC Sept. 19-20 will follow with an hour for each candidate.

These forums are focusing on what the U.S. can do. They start with candidates’ commitments to get off fossil fuels ASAP. An official climate debate could go further, where some candidates can propose more inspiring goals than trying to avoid the worst consequences ahead. Considering what kind of future we can promise today’s high-school activists, a few candidates are starting to talk about reversing global warming and restoring our climate. Climate Restoration is starting to gain attention — it’s in the new Climate Emergency Resolution introduced by Bernie Sanders and AOC .

That’s where we in Northern California come in. We’re uniquely situated to showcase how we can restore our climate. We can introduce these hopeful goals to people who have the ears of the presidential candidates.

We’re enlisting volunteers to organize a one-day Healthy Climate Briefing  for climate policy advisors from all presidential campaigns  about solutions that go beyond the 2050 goals to stay under 2°C or 1.5°C.. (This idea was sparked by our successful efforts with Governor Jay Inslee’s campaign, as we report at The 2020 Climate Election, Jay Inslee & Me.) Organizing the briefing will:

In 2019-20, many new climate technologies and solutions are being developed in the San Francisco Bay Area (SFBA). Many entrepreneurs have experience from cleantech and have already connected with elected officials. The briefing will introduce specific technologies  — and provide inspiring stories and hopeful visions candidates can feature when they talk about a better, not less bad, climate future. Topics and briefers can include:

We can increase advisors’ motivation to come

On a parallel track to this nonpartisan event, Bay Area climate advocates and activists who support particular candidates will organize multiple fundraisers featuring the climate policy advisors as “surrogates.” At these events the nights before & after the briefing, advisor/surrogates will  hear from their climate-focused supporters.  (We will facilitate leaders and members of 501(c)3 organizations to participate in these fundraisers as individuals.)

Can you help make the briefing and fundraisers happen?

Find out more at How we’ll put together the Healthy Climate Briefing and Fundraisers. It’s a Google Doc with:

This will also connect to our Climate Restoration Emergency Action Report Card for 2020 candidates.

Join our crowdsourcing project with a new partner.