I’m Anna, a 23-year-old Climate Project Manager. As long as I can remember, I’ve wanted to make my life’s work healing the broken relationships between humans, nature, and each other. I’ve been privileged to volunteer and work towards this goal for nearly a decade. Last fall I joined Felix at ClimateChangesEverything, on a mission to empower more young people to get paid to work on climate solutions.

Felix is a 71-year-old lifelong activist, and one of my Climate Project Sponsors. At 19, he took a year off from college to organize Vietnam War draft resisters. After years as an entrepreneur, in the early 2000s, he led the successful campaign to get carmakers to build plug-in hybrids, and since then has volunteered full-time on climate.

Felix and I love to strategize about how humanity can ensure a livable, even bountiful, planet for all beings, here now and to come. In light of the climate crisis, the pandemic, and our democracy-in-peril, we’ve evolved our current strategy to the idea of “Active Allies”.

We define “Active Ally” as an individual or group (like Felix or my second Sponsor, the Anthropocene Institute) who provides funding and other resources to help young people build a safe, healthy, flourishing future.

COVID-19 is exposing a stark reality: our economy vastly undervalues and underinvests in our essential servicepeople, caregivers, and stewards. Felix and I see the potential for a tidal wave of engagement in response to this dire moment: hundreds of millions of people, mostly under 35, pushing for systemic changes and ambitious regenerative solutions.

People of all ages have been mapping ways to protect and restore our communities and the natural world that sustains us. Youth and young adults are taking the lead as trailblazers and daily hands-on workers, many of them galvanized by Greta Thunberg and the rapid growth of groups like Sunrise.

How can society name, applaud, and reward those who respond to crisis with courage and determination? Felix and I propose “Active Allies” as a framework to provide basic income for these “Crisis Heroes”, whose work includes mobilizations and campaigns for public health, progressive politics, environmental justice, and more.

We see precedents in short-term fellowship programs like Climate Corps, Americorps, and Environmental Entrepreneurs. An Active Ally can support a young person early in their career, so they can not only volunteer, but get paid to advance what they care about most, while building the regenerative economy we need.

We envision a national program that could surpass the most popular and successful precedent: the New Deal’s Civilian Conservation Corps. Launched a mere 40 days after FDR’s inauguration, the CCC employed three million unemployed Americans aged 17-28 in environmental conservation programs. (It was for men only, and though it included African Americans and Native Americans, it only began to challenge segregation.) That set the stage for the even larger Works Progress Administration, which employed nine million Americans, mainly to modernize and expand infrastructure. 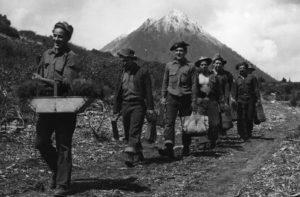 Felix and I are taking small steps toward a bold vision of a 21st- century, equitable version of the CCC/ WPA. First dozens, then hundreds of today’s volunteers and job-seekers can be paid to work full-time. Their first Active Allies can be individuals who can afford this commitment in these uncertain times. Then small groups and philanthropies will come forward. Eventually, by popular demand, companies, large organizations, and governments will join in.

We’re getting the ball rolling by seeking Active Allies for young Crisis Heroes to work on climate projects. For support, we’re starting by reaching out to Felix’s network, especially to people in their later years, many of whom have histories of dedicated activism and innovation. Many see the need for investment in programs at least as ambitious as the Green New Deal. They’re inspired by the energy, passion, vision, communications tools, and organizing strategies of youth who want to go all in.

Signing up as an Active Ally could be a fitting capstone to peoples’ professional and volunteer achievements. Some have the resources to commit as Sponsors (individually or in small groups), and others can be Mentors. All have networks of people to alert and involve.

We invite Bay Area climate advocates to consider Sponsoring a young Climate Project Manager through ClimateSparking, our pilot program for Active Allies. Check it out or contact us.