Update | March 23, 2020:
In early February, we projected a big-picture, best-case scenario for the year ahead. We envisioned a ramp-up of climate and electoral activism in the spring, to expand as never before in the summer and fall, setting the stage for a Climate Election: millions of activated Americans mobilizing to ensure the next President leads emergency action in 2021.

Then COVID-19 arrived. With in-person events and activities suspended for the foreseeable future, climate activists are regrouping. Sunrise Movement is taking the lead by offering Sunrise School for millions of youth and young adults (many out of school or work) to prepare to hit the ground running when the time comes. People of all ages are stuck at home; we can use this time to respond to the pandemic and organize digitally for climate action.

We’re encouraging everyone to support Sunrise School and similar efforts — including our startup, ClimateSparking, which enables young adult climate advocates to get paid to work on climate projects.

This article is signed as individuals by:
Dr. Erica Dodds, COO of the Foundation for Climate Restoration
Dr. Paul Zeitz, founder of Build A Movement 2020
Felix Kramer, with the ClimateChangesEverything team

People who recognize we’re in a Climate Emergency want a transformational movement to galvanize the masses, to demand sweeping action for the Green New Deal and climate restoration.

Of course, we’re also in a Democracy Emergency; even the thought of four more years going backward on climate justice, and so much more, is utterly intolerable. We can respond in full force to both emergencies by organizing a Climate Election, where climate-friendly candidates win at every level of government.

What would it take to get there? Unless we really imagine a future, we can’t make it happen.

The timeline of events that follows can help give us confidence in our goals, and advance strategic discussions/planning among climate emergency and climate restoration leaders and groups. (If some of these milestones aren’t met, of course, work can be done to catch up.)

JULY 2019:  First House and Senate Climate Emergency Resolutions call for action to halt, reverse, mitigate, and prepare for the consequences of the climate emergency and to restore the climate for future generations.

NOVEMBER 2019:  The Sunrise Movement begins developing its movement plan for 2020. In a nutshell, it’s “Organize-Vote-Strike”.

JANUARY 2020:  Sunrise endorses Bernie Sanders for President, and releases a five-minute video, We Are the Political Revolution, talking about their big hopes for this year and beyond. After celebrating their stunning emergence in 2019, Sunrise kicks off Our Plan to Win with nearly 2500 launch parties across the country (up from only about 250 last year). Applications close for Sunrise Fellowships to take Sunrisers around the country to build the movement and momentum for the Green New Deal.

EARLY FEBRUARY 2020:  Sunrise focuses on organizing Hubs and “Strike Circles” in many of the 24,000 public and 10,000 private U.S. high schools and over 5,000 U.S. colleges. Members recruit their parents and neighbors, starting or joining voter registration campaigns, collecting signatures for voter pledges, and turning out throngs of climate emergency activists at election debates, town halls, forums, and campaign fundraisers in every city and town across America. Additional groups join to advance the Climate Restoration Emergency Action Report Card as it releases version 3.

LATE FEBRUARY 2020:  Climate leaders commit to a Climate Election Everywhere strategy to register and energize voters in every Congressional District. They describe how the growing citizens’ movement is building a campaign so that no candidate for office at any level can be credible unless they both acknowledge the reality of the climate emergency and propose or endorse solutions and actions matching the scale of the challenge. That means both getting off fossil fuels as soon as possible and reversing global warming by protecting, restoring and regenerating our threatened climate and ecosystems.

EARLY MARCH 2020:  Youth climate activists and their allies assemble at every state capitol to draw attention to state legislators’ positions and past votes on climate-related state policies and pension investments. To track what candidates say and do, they begin to collaborate, building on the ClimatePolitics wiki. Early primaries show youth voter turnout increasing significantly.

LATE MARCH 2020:  Youth climate activists are in the best position to start going on strike en masse, first on Fridays, in some cases longer. To their parents or authorities who say, “Go back to school,” their heartfelt response is “Why, if we won’t have a future?” ClimateSparking gains traction, allowing young adult climate advocates to be paid as Climate Projects Managers with older Sponsors and Mentors. Sunrise’s six-week Strike Circle trainings focus on organizing Earth Day walkouts in thousands of high schools and colleges.

APRIL 22, 2020:  On the 50th anniversary of Earth Day, tens of millions of active climate supporters worldwide go on strike from school and work. If unable to strike, they sign pledges to end Business As Usual in their lives and do “whatever it takes” to head off human, species, and ecosystem extinction and restore our climate. (Research shows the success of many popular nonviolent movements that have the sustained support of 3.5% of the population. That’s about 11 million for the US.)

JUNE 2020:  Sunrise Semester brings youth climate activists to politically significant states. Other organizations develop programs for students to relocate for the summer, with the same mission to turn out votes for climate action and the Green New Deal.

JULY-AUGUST 2020:  Over one million of the 20 million college students and many of the 75 million high school students in the U.S. join Climate Election Summer projects in their college or home towns and other locations.

SEPTEMBER 2020:  Back-to-school days in most high schools and colleges feature Climate Emergency & Restoration Teach-Ins for students and parents, including panels with local electoral candidates and incumbents.

NOVEMBER 5, 2020:  On Election Day, after sustained voter registration and Get Out the Vote campaigns, candidates and incumbents supporting climate emergency action gain control of the House, the Senate, and the Presidency. And because many of the winners understand that climate is at the intersection of so many other issues, the election ratifies the climate justice features of the Green New Deal, uplifting its core message that true, lasting climate solutions require economic and social justice. And supporters of the UN’s 17 Sustainable Development Goals start planning for the United States to resume its leadership in these complementary global efforts.

JANUARY 16-20, 2021:  Mass strikes, mobilizations, and nonviolent direct action greet the 46th US President and the 116th Congress. Millions of youth climate activists — along with many more millions of adults striking or declaring their intent to end Business As Usual — gain the cooperation of community, corporate, and political leaders. (That complements Extinction Rebellion, aiming globally in early 2021 for local and national Citizens’ Assemblies.)

JANUARY 21-22, 2021:  Congress passes a Climate Emergency and Restoration Resolution. The President issues a parallel declaration, followed by the first of many executive orders to begin implementing the Green New Deal and take steps to reverse global warming and restore our climate from strategies developed during the campaign season. 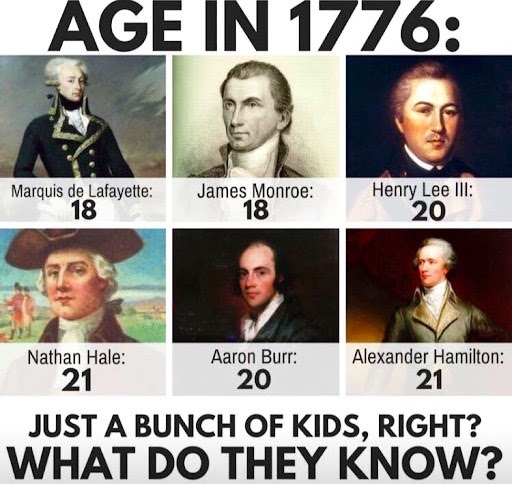 Some of these young revolutionaries saw their major accomplishments a decade later, but they got their start early.